In what she calls the truth with Anita Joseph, the sexy Nollywood actress, has taken to her Instagram page to talk about one of the lies she has been told by her man (now ex).

This one is quite funny because she said her man lied with his mum in what seems to be unconventional for a Nigerian mum.

According to the actress, she found a sexy lingerie in her man’s wardrobe. To cover up, he had to lie that it belong to his mum.

She however revealed that she questioned him about such being his mum’s. It is too sexy for her, she said. She then said she asked if he is sleeping with his mum for her to have such a sexy lingerie.

Read the rest of the story below.

The Truth with Anita Joseph (Column)
What is that One Lie that your
partner has ever told
You (Ex or present)
Mine was a sexy lingerie I found in his wardrobe and he said it’s his mum’s,i wonderd but bros this too sexy to be your mum’s OMG
She ties wrapper when she’s here
I said abi you Dey do ur mama then it’s ok.
He got pissed started shivering and said d truth.
The Afro Queen will read ur comments #mummyHen 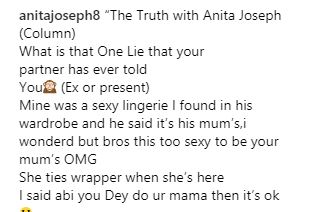