The Okoye brothers have in recent times sparked rumours of a possible fight between them through the contents of their social media posts which many interpret as messages to one another.

All indications now points at a possible future where tree twins will pursue/live a music career as individual music brands and not as a group that Africans have come to love and appreciate.

The rumours of the fight between them has awakened the curiosity of so many fans, this lead them to asking series of questions and for some,  a few words of advice. It so happened that one fan took to the comments section of Peter Okoye’s Instagram page to advice him on making his immediate family a priority and He answered to the affirmative stating that his family comes first.

The Fan wrote ”Mr. P. u 1st priority is @lolaomotayo_okoye n he kids b4 @udeboypsquare. U n Lola r now 1 4ever o. U will b a foolish man to place your brothers ahead of your kids n dia moda. Our own na our own. my own na my own. Lola has every right to decide how she wants her home to be”.

The singer in his reply wrote, ”my family come 1st”.

Another fan also took to Instagram to wish him the best as according to the poster, she wrote, ‘‘Wish you the best you deserve love you and your lovely kids!!!”. Peter gave the same reply he gave to the first fan.

In another development, Peter Okoye was reported to have sent a letter of termination of contract between himself and the PSquare brand. The Letter below… 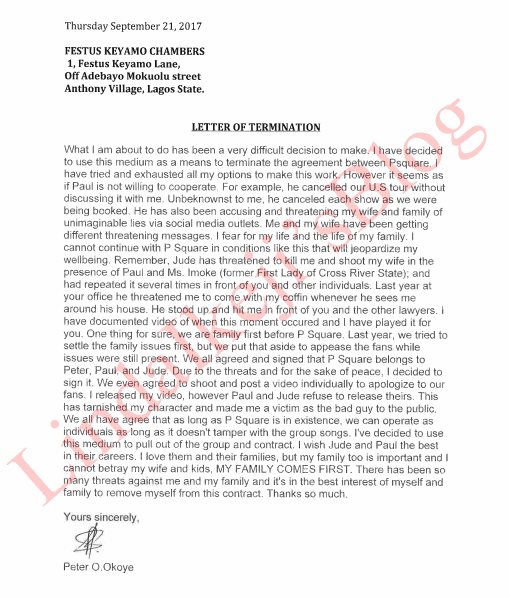 While we wait to hear from Paul Okoye, let’s hope they find happiness as they part ways. It breaks our hearts though.