- A Nigerian woman, Cynthia Onoriode Alu, has celebrated God on social media for blessing her with triplets

Having children is a thing of joy for most women. However, having more than one child at a time can prove to be quite tasking.

Despite that, many people give thanks to God despite giving birth to two, three, four or more children at a time.

Legit.ng has gathered the report of a Nigerian woman, Cynthia Onoriode Alu, who has proudly showed off her triplet daughters on social media.

Cynthia shared a photo of her kids from when they were just four months old alongside a more recent picture where they are four years old. 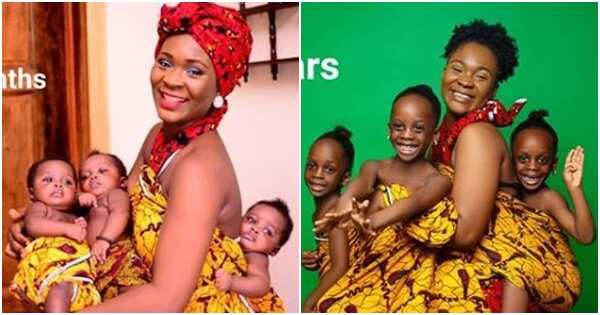 The happy woman explained that four years ago, she felt she could not do it but is glad to see that she has coped just fine. She also proceeded to calling God several beautiful names to express her gratitude. See her post below:

Just recently, Legit.ng reported that a , Oyo state and is in dire need of financial assistance.

According to the photos shared with Legit.ng by Facebook user, Bakare Wasiu, the young woman appears to be living in poor conditions with barely any basic provision for her children.