- Nigerian singer Burna Boy has reacted to the death of a young Nigerian man, Kolade Johnson, who was allegedly killed by a Special Anti Robbery Squad (SARS) personnel

- According to the singer, the End SARS hashtags on social media are a waste of time till Nigerians are ready to actually fight

The power of Nigerian celebs cannot be overemphasised when it comes lending their voices to an injustice.

A number of celebs have been very vocal about the ills perpetrated by Special Anti Robbery Squad (SARS) officials following several reports of their brutality. However, popular singer Burna Boy, seems to have a different opinion.

The singer took to his Instagram page to explain that until Nigerians are actually ready to fight SARS officers then the peaceful protest and End SARS hashtags on social media are pointless.

He also added that nobody should include him in any End SARS hashtags because it is a waste of everybody’s time. 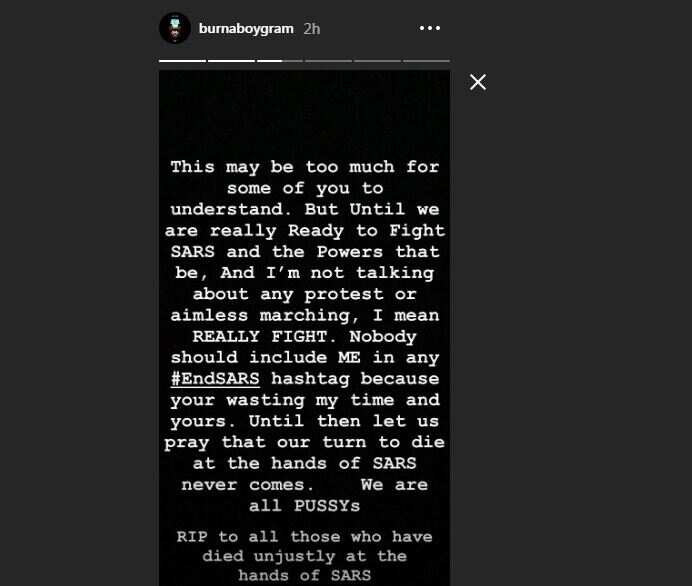 Until we are really ready to fight SARS, nobody should include me in any #EndSARS hashtag - Burna Boy
Instagram

The singer also mourned the death of a young Nigerian man, Kolade Johnson, who had been hit by a stray bullet allegedly fired by a SARS officer when he went to watch a football match. 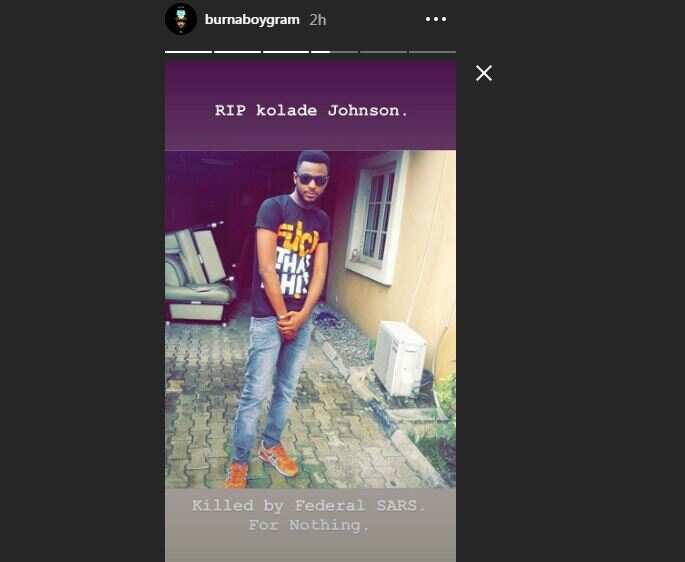 Until we are really ready to fight SARS, nobody should include me in any #EndSARS hashtag - Burna Boy
Instagram

We agree that something profound should be done to end SARS brutality.

In other news, Legit.ng reported that

In a recent post shared on her verified Instagram page, Adesua, shared a photo of Kolade and demanded that justice be served. The bold actress also tagged President Buhari and his vice, Osinbajo in the post in which she stated that Johnson's only crime was stepping out of the house to watch football at a viewing centre on the fateful day.