- A statement by presidential spokesman Garba Shehu said Soyinka dabbled into a field where his expertise is limited, adding that many countries have implemented lockdown to control COVID-19

- Shehu also defended the legality of the lockdown, saying the government’s primary duty in law and action is the defence of the people of

The Nation reports that the presidency urged Nigerians to ignore Soyinka's comment on the presidential lockdown directive.

Soyinka had on Tuesday, March 31, faulted Buhari's lockdown order and the government's approach to tackling the novel coronavirus pandemic.

He took on the president for locking down the two states and the FCT when Nigeria is not in a war situation.

Soyinka also urged governors of the affected states not to cede their constitutional powers to President .

However, reacting on Wednesday, April 1, the presidency said though Soyinka had the right to his own opinion, his intervention was misplaced and misleading, noting that he had strayed away from his professional expertise.

The presidency said Soyinka dabbled into the scientific field “where his expertise is rather limited”.

The reaction was contained in a statement by the senior special assistant to the president on media and publicity, Mallam Garba Shehu.

Shehu noted that the approach adopted by President Buhari remained the globally-prescribed means of fighting the pandemic, pointing at the advice of some renowned authorities in the field of science. 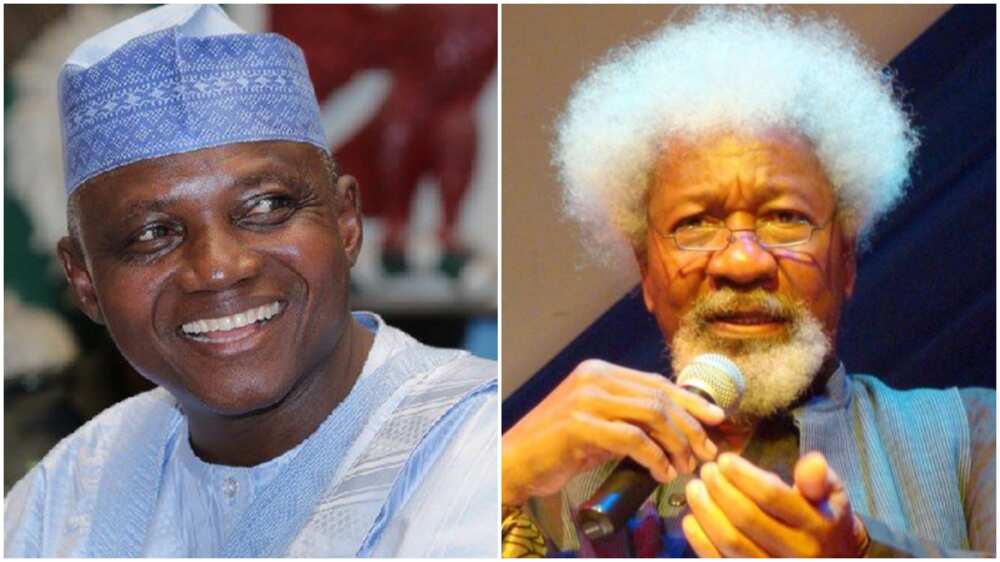 “Prof Soyinka is not a medical professor. His qualifications are in English literature, and his prizes are for writing books and plays for theatres. He is of course entitled to his opinions – but that is exactly all they are: semantics, not science. They cannot – and should not – therefore be judged as professional expertise in this matter in any shape or form," the statement reads.

Shehu said other countries across the world have implemented lockdown in a bid to contain the virus, added that the Nigerian government also took a similar step based on medical specialists' advice.

The presidential spokesman also tackled Soyinka for saying the country is "not in a war emergency", citing renowned health specialists who have likened the pandemic to war.

He also defended the legality of the lockdown, saying "the government’s primary duty in law and action is the defence of the people of Nigeria. We face a global pandemic. Nigeria is now affected."

“Perhaps Wole Soyinka may write a play on the Coronavirus pandemic, after this emergency is over. In the meantime, we ask the people of Nigeria to trust the words of our doctors and scientists – and not fiction writers – at this time of national crisis,” Shehu said.

Earlier, Legit.ng reported that some COVID-19 patients in the Infectious Diseases Hospital (IDH) Yaba have produced a video to

The infected patients also thanked health workers for nursing them back to health in the new video widely circulating on social media.

The video was shared on Twitter by Governor Babjide Sanwo-Olu of Lagos state on Wednesday, April 1.

In another related report, Nigerian music star, Davido, recently became a cause for concern for several of his fans on social media after some people for the novel and deadly coronavirus.

The coronavirus pandemic is a disease that is raging all over the world as even developed countries are struggling to contain it and also reduce the death rates as much as possible.

This is particularly difficult because there is no vaccine for the disease yet. People have been advised to stay at home and to also practise social distancing.

Davido was advised to take another test to ascertain if he has the coronavirus after his first test came out negative despite him being in contact with people who have tested positive.

The Risky crooner has now taken to social media via his Twitter page to reveal that the result for his second test is out and that he is still not infected with the virus.

We have upgraded to serve you better