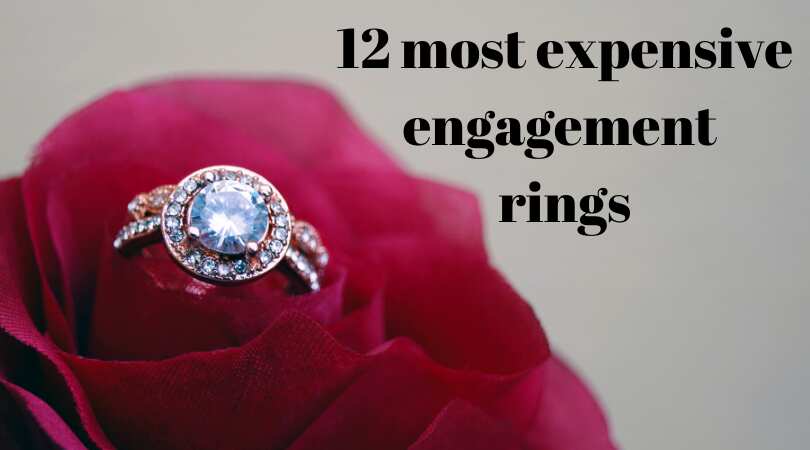 How much should you spend on the ring that is a promise of marriage to your loved one? For years now, there has been a notion that one should get a ring that is worth the sum of two monthly salaries. However, those who have given the most expensive engagement rings to their sweethearts have proved otherwise. They have made choices based on their financial position and the expectations of their loved ones.

Most expensive engagement rings in the world

What is the most expensive ring in the world? The is the priciest with a tag of $80 million.

It was made using a diamond that was mined at the end of the 19th century in Kollur Mine, Guntur, India. The diamond is deep blue, and it weighs 31.06 carats. King Phillipe IV was the original owner of this diamond ring.

Besides the Wittelsbach-Graff diamond ring, there are other options that are very costly. Who has the most expensive engagement rings?

Some of the world most expensive rings have been given to celebrities on their engagement. The rings are listed below; 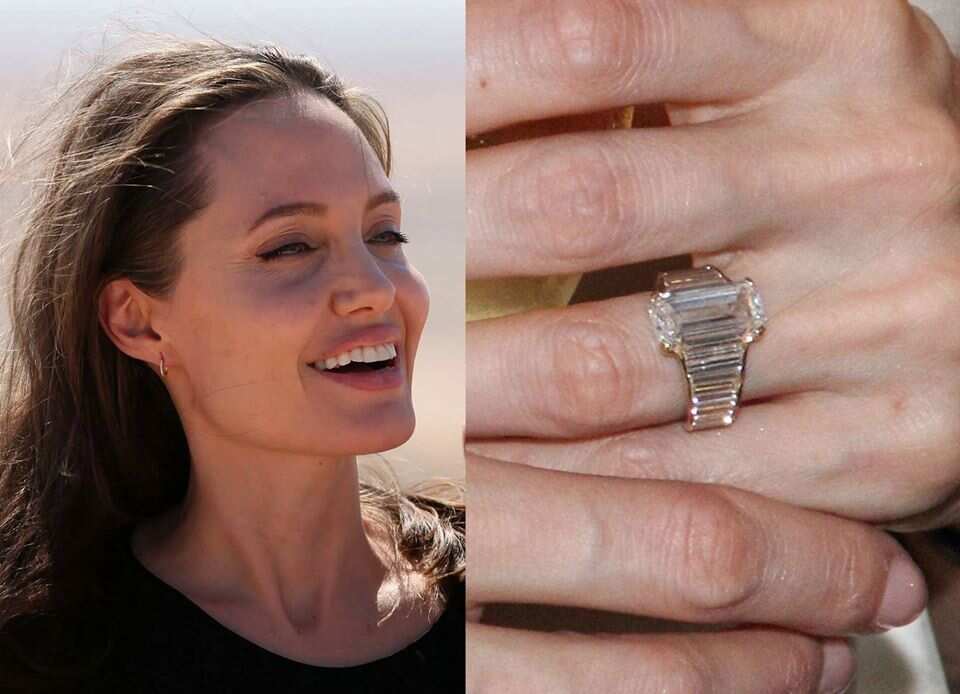 In April 2012, news spread across the media that Brad Pitt had proposed to his long-time girlfriend, Angelina Jolie, with a worth $500,000. It was designed by Robert Procop, who had been hired by the famous actor to get Angelina a custom-made band that matched her taste.

The ring had in the middle and a beautiful emerald-cut trapezoid shaped diamonds in the shanks to accentuate the actress’ hand. The process of designing and creating it took .

Brad had been in a romantic relationship with Angelina since 2005. After the engagement, the couple held a secret wedding on the 24th of August 2014 in Correns, France.

Unfortunately, Brad and Angelina’s marriage ended in a divorce. The actress filed for the annulment of the union in 2016. Although the former lovebirds are currently single, their divorce is as they are still contemplating how to divide their massive estate. 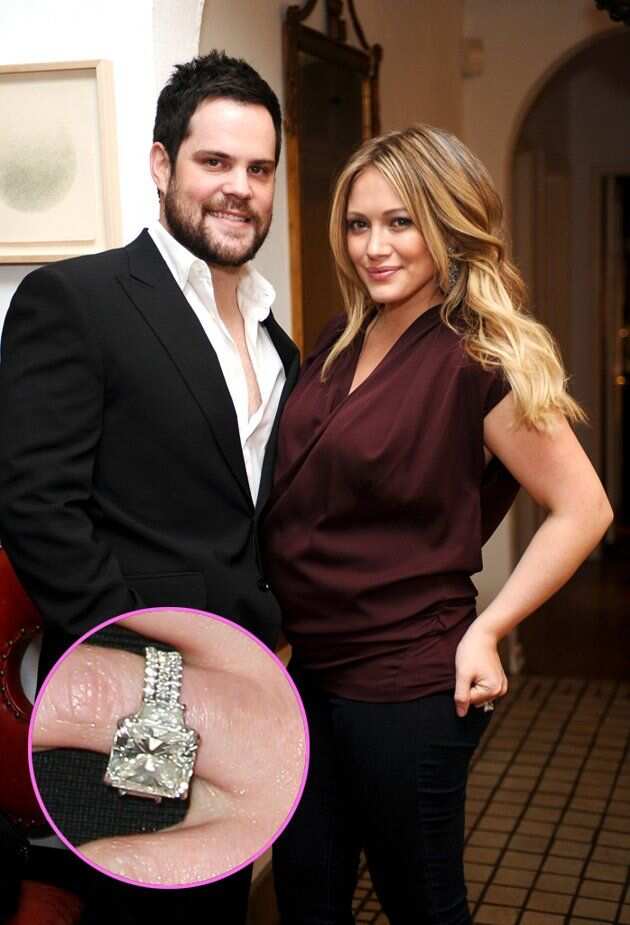 Hilary Duff is one lucky recipient s of one of the very expensive engagement rings in the world. In 2010, her now ex-husband, Canadian ex-hockey player Mike Comrie, proposed to her with a ring that was .

Her band was a 10 - 12-carat diamond with a princess diamond or cushion cut. Later that year, the couple exchanged their wedding vows. Unfortunately, she and Comrie filed for divorce and are now co-parents to their son Luca.

That was not the end of the journey for Hilary. In May 2019, she got engaged to Matthew Koma, whom he had been dating since 2017. Her second engagement ring also features a cushion cut diamond, but it is much cheaper.

Although she has not revealed the name of the designer, her new ring is estimated to have a $40,000 and $80,000. How lucky is she to have received two expensive rings? In 2005, Tom Cruise proposed to Katie Holmes with one of the most expensive engagement rings ever . She happily said YES! and accepted the ring that had a price tag of at least $1.5 million.

The band was rather uncommon. It had a five-carat Edwardian cut oval-shaped diamond in the middle. The diamond was accentuated with gleaming platinum rose gold accents. It also featured pave diamonds at the shanks and a halo.

The couple then married in 2006 in Bracciano, Italy. In the marriage, they were blessed with a daughter named Suri. The marriage ended in 2012 after five and a half years of marriage. The divorce settlement was reached ten days after the actress filed for the annulment of the marriage.

In September 1998, of her life, President Donald Trump. The two were an item for six years before the President of the States of America proposed to her with a ring whose current worth is estimated at $3 million.

The ring was a 15 carat, D Flawless, emerald-cut diamond-type that was designed by House of Graff. The President got it at a 50% discount, something that he excitedly shared with the media.

House of Graff is one of the most expensive engagement rings brands, and it is known for offering value for money. In January 2005, the President married Melania at his Mar-a-Lago estate. The event was estimated to have cost £1.9 million (approximately 2.2 million dollars.)

On their tenth anniversary, Donald upgraded Melania’s ring as her anniversary gift. Today, the couple is still happily married. Football player Russell Wilson spared no expense when he surprised the love of his life, Ciara, with diamond bling worth about $2 million. The singer and mother of two happily accepted his proposal.

The band . It featured a big diamond that was flanked by four other smaller side stones. Two were trapezoid-shaped on each side of the center one, and the other pear-shaped ones were on the outer edges.

The lovebirds wedded in 2016, and they are still happily in love. Together, they are parents to an adorable . The singer also has a son from a past relationship with rapper Future.

Russell Wilson has a $115 million and an annual salary of $30 million, so he afforded the bling for his wife without any strain whatsoever. 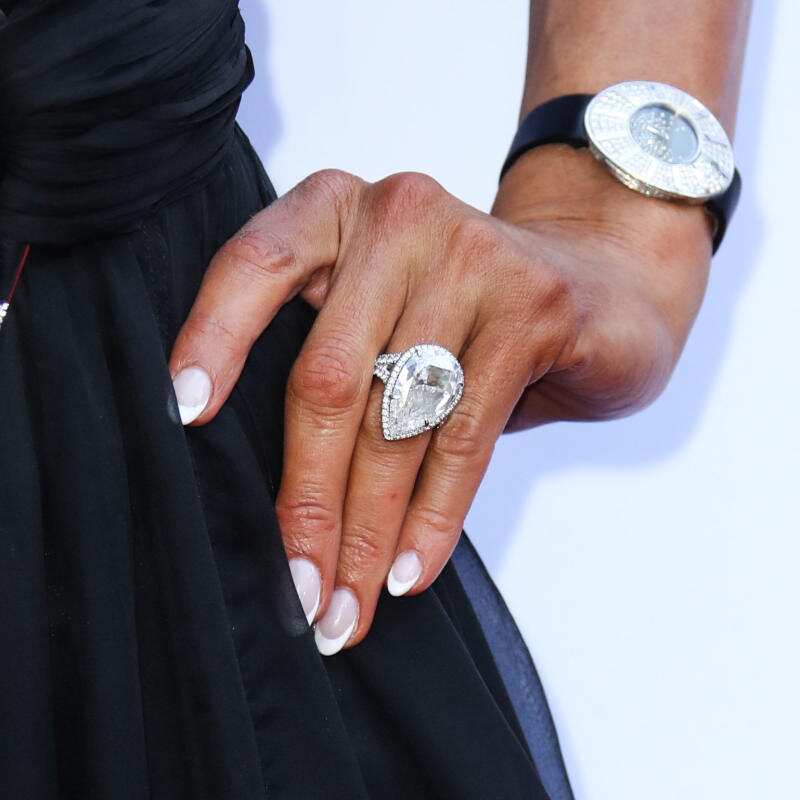 During the 2017 Christmas holidays, Chris Zylka proposed to his then-girlfriend, Paris Hilton, with a ring that closely resembled her mother’s engagement band. She accepted the proposal in Aspen, Colorado.

The piece of fine jewelry that was designed by Michael Greene , and it is pear-shaped. Chris Zylka and Michael Greene took over two days to create it.

One interesting thing about the ring is that the beauty queen once lost it in a Miami night club. Luckily for her, a security guard found it in an ice-bucket.

In November 2018, the couple called off their engagement. Paris claimed that she wanted to tour the world to promote her businesses, and that marriage was not the best decision for her.

Unlike other celebrities who chose to give back their rings after their relationships failed, Paris decided to . She kept it because diamonds are girls’ best pals. She had replicas of the original bling made because she is afraid of visiting certain countries with the original one. Ryan Reynolds first met Blake Lively as they were filming Green Lantern. The pair started dating in October 2011, and just one year later, they were married. How did the actor propose?

He went down on one knee and put on her finger a . Her ring became a trendsetter in the bridal and wedding industry.

The diamond in the middle of the band is oval with a light pink tint. Its setting is a rose gold color, and the middle gem is held in place by four prongs.

The made the actress the first celebrity to have a rose gold engagement band, and soon afterward, rings with this color became the in-thing. Her band was designed by Lorraine Schwartz, a distinguished celebrity jeweler, who has worked with many celebrities over the years.

The actor married Blake on the 31st of August 2012. The couple is still happily married. 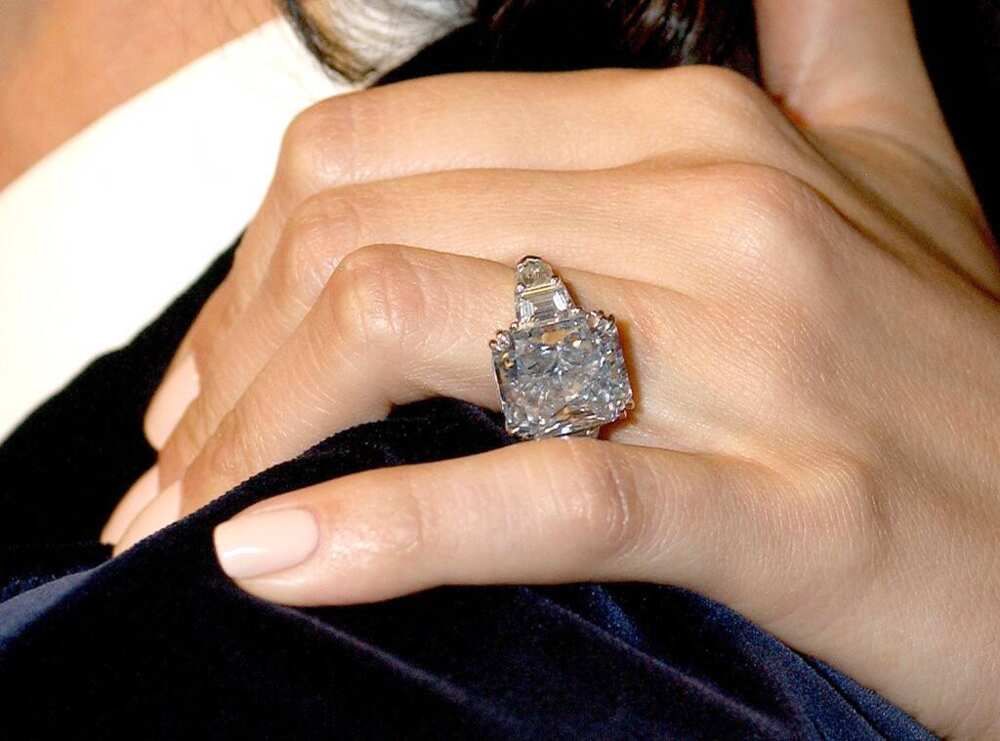 Singer and actress Jennifer Lopez has been engaged a couple of times now, engagement being to Alex Rodriguez in 2019. However, the bling she got from Marc Anthony carries the day.

The bling had an estimated price tag of $4 million. It was an diamond ring. It featured a rare blue diamond. The couple later exchanged their marriage vows and gave birth to a lovely set of twins. However, the marriage ended in 2014.

In 2019, Alex Rodriguez, whom the singer had been dating since 2017, proposed to her with a 15-carat emerald cut diamond band. Although the price is yet to be disclosed, it is definitely in the range of $1 million to $5 million.

Will Alex Rodriguez be her happily ever after? We wish Lopez and Rodriguez a happy and fulfilling marriage. The singer was previously engaged to Ben Affleck, Cris Judd, and Ojani Noa. 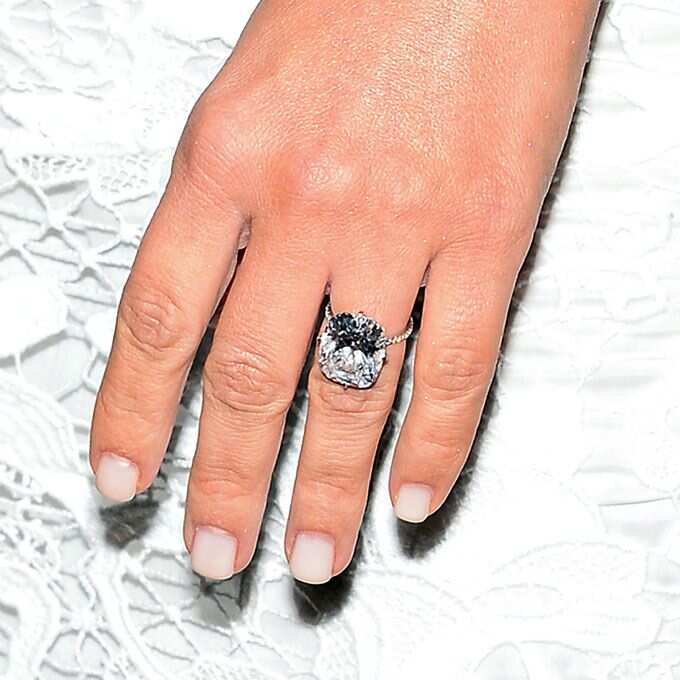 In 2013, rapper Kanye West proposed to the reality star and business mogul Kim Kardashian with a 15-carat rock. How much is Kim Kardashian ring worth? The ring was cushion cut, and it was valued at about $4 million.

The would later become infamous after it was robbed of her in Paris in 2016. The beauty queen had flown to Paris for the Paris Fashion Week when she was held at gunpoint.

After grabbing her and tying her up with plastic cables and and mouth, the robbers stole her jewelry. During the launch of the new KKW fragrances in November 2019, Kim’s official pictures featured a ring that looked just like the one she got from Kanye West.

Later, she revealed that she did the photoshoot that was borrowed from Lorraine Schwartz. Her original diamond bling is yet to be returned to her.

Currently, Kim is married to Kanye. Together, they have four are North, Saint, Chicago, and Psalm. Beyoncé engagement ring was , and it cost Jay-Z $5 million to acquire it. The glamorous piece of jewelry is unlikely to go out of fashion, and it goes with almost any outfit.

Jay-Z proposed to his queen over a decade ago with a 24-carat emerald-cut diamond ring with a split shank. The two had dated for about six years before the day he proposed.

While the couple is known for guarding its privacy, there were rumors that he popped the big question on the birthday (4th of September 2007.)

On the 4th of April 2008, the lovebirds exchanged their nuptials at Jay-Z’s penthouse. The event had 40 of their closest family and friends at the ceremony. The late Dame Elizabeth Rosemond Taylor was an American actress who in her lifetime. She is remembered for owning one of the priciest diamond sparklers.

The actress loved expensive bling. She met Richard Burton while she was still married to another man, Eddie Fisher. Initially, Burton proposed with a platinum-set Bulgari pendant that featured an 18.61-carat emerald that was surrounded by diamonds.

Later, he gave her a 33.19-carat ring that was Krupp Asscher cut. She loved her new ring so much that she wore it almost every day. The actress died on the 23rd of March 2011, and her ring was auctioned at $8.8 million that year.

Before her biggest ring yet, she had been engaged to Conrad Hilton with a 4-carat diamond platinum sparkler. Later, she became the fiancé of Michael Wilding, who gave her a cabochon sapphire ring.

In 1957 Mike Todd proposed to her with a 29.4-carat emerald cut Cartier band, and this one was considered to be among the most dazzling diamond bands ever. After Todd died in a plane crash, she got engaged to his friend, Eddie Fisher.

Instead of a ring, Eddie Fisher gave her a 40-carat bracelet with 50 diamonds. 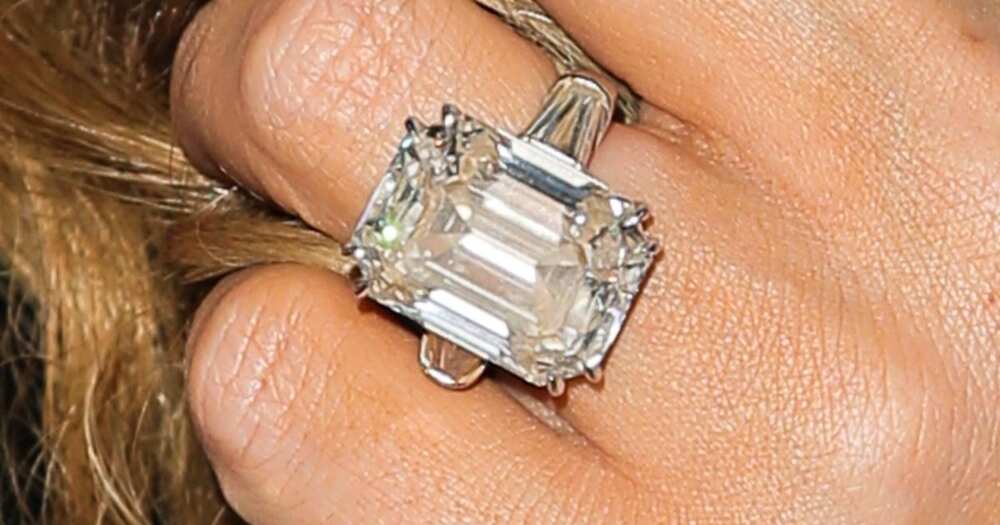 The Wilfredo Rosado engagement ring weighed 35 carats. It featured tapered baguette diamonds accents on each side.

Jack had been dating her for about 18 months before the couple decided to part ways. During the split, the ring was part of the .

Shockingly, the singer sold it to a Los Angeles based jeweler at only $2.1 million. A was signed between the seller and the buyer.

An insider claimed that she sold it at that price because she was short of money. Apparently, it was worth less than $10 million in reality.

Currently, the singer is in a , who worked as her backup dancer for a long time.