- A beautiful mother, Busisiwe Kondlo, was waiting at the Port Elizabeth traffic department after writing her drivers' test

- When Kondlo was struggling to calm the baby down, a kind woman who works at the department helped her by taking the baby and settling him

On Wednesday, February 26, a stunning mother, Busisiwe Kondlo, thanked a kind woman who helped her when she was having a tough day.

Taking to the #ImStaying Facebook page, Kondlo revealed that she was at the traffic department in Port Elizabeth after writing her driving test.

She was standing in a long line when her partner brought her their son who had started crying.

"My child was angry, he was just crying. Now everyone was looking at me and I was starting to be frustrated," she wrote.

Kondlo tried everything but her baby just would not stop crying and that was when a kind woman, who works at the department, stepped up to help her.

"A lady who works there came to me and she just took my baby and went with him. She danced with him for about 20 minutes and my son slept peacefully on her while I was being helped by her colleagues until I was done. Her name is Alta Van Wyk and for that #Imstaying." 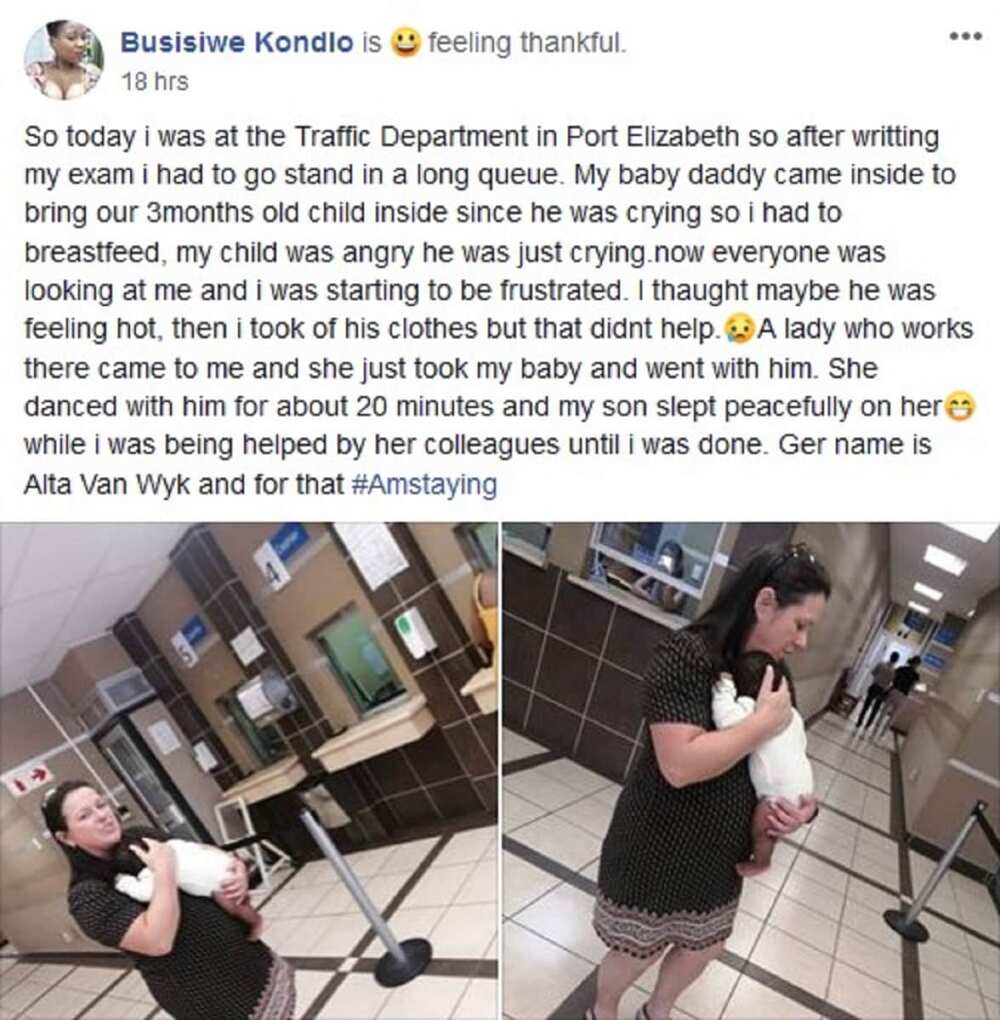 The thankful mother and woman who came to her rescue. Photo credit: Busisiwe Kondlo/Facebook.
UGC

South Africans were inspired by the story and they gave their two cents' worth in the comment section.

"Busiswe, thank you very much for sharing this very precious story! Thank you for you special praise for Alta van Wyk, what a very special person. Alta and Busiswe I wish you two all the best and God's richest blessings on you and your loved ones."

"There’s still kindness out there. I haven’t lost hope. Nice one hey. God bless her."

"Good people doing great things. God bless you and your family, stay strong in these trying times. Changing lives one step at a time. Love it."

In other news, after welcoming a set of twins on March 13, a single mother in Florida identified as

Wolliston, who said she never thought she would have two, added that she believes the boys were a gift, after recently learning that both of her grandmothers lost twin boys at birth.