Some photos of a physically challenged young man who completed his National Youths Service Corps (NYSC) have surfaced in the internet community.

There is no doubt that the human mind is a powerful tool and even when constrained by physical obstacles, a willing and resilient mind will scale through barriers and conquer. Such is the case of a Nigerian graduate that has inspired people on social media.

Although the identity of the individual is yet to be known, his feat has definitely served as an inspiration for people that may be going through a similar health challenge .

In the photos that have now become a viral sensation, the individual was spotted happily striking a pose with his certificate of completion at what appeared to be a venue of the NYSC Passing Out Parade (POP).

Check out the pictures below: 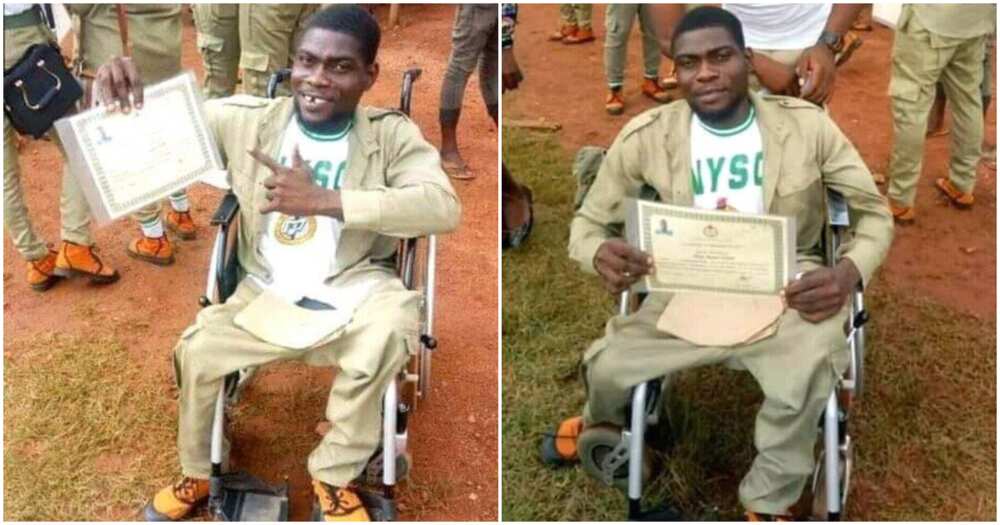 It is still unclear whether the ex-corps member recently completed his service year or his photos simply resurfaced to motivate other physically challenged individuals.

In a related story, Legit.ng previously gathered the report of a physically challenged corps member Zahradeen Saiful-Islam Deeneeya popularly known as Dini, that had the opportunity of

During a visit to the Abuja Orientation Camp, she specially paid Dini a courtesy call and gave him a first-class treatment.