- This reports comes after Tiwa Savage put up Yemi Alade's album cover on her Instastory, hailing her

- Yemi Alade on the other hand, acknowledge the music star by sharing the post on her Instastory

Yemi Alade who recently dropped her album, Woman Of Steel, has been widely celebrated by her fans across the country. Surprisingly, Tiwa Savage who many have believed to be the rival of Alade, shocked many people when she celebrated her.

Tiwa Savage, in her Instastory post, shared the Yemi Alade's album cover and praised the singer. In her words, "Huge congrats on your body of work Queen @yemialade. For sure you be woman of steel." 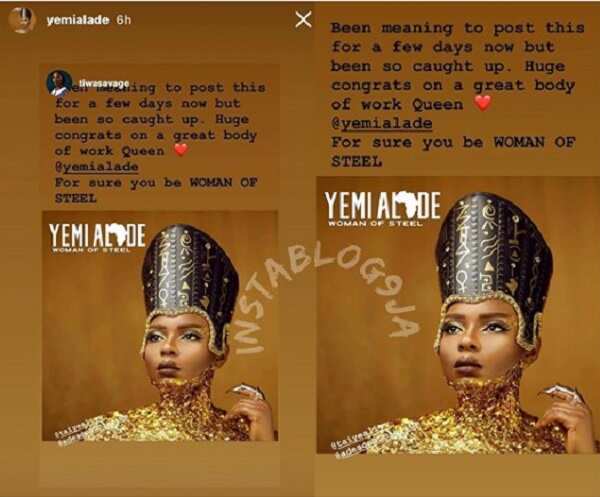 The two music divas who have always seemed to be in competition for the crown of queen of the industry had at some point,

This reportedly came after Yemi Alade recently on a radio show claimed to be on the same level with Davido and Wizkid, stating that there is no such thing as a number one artiste in Nigeria. Yemi on the same radio show also didn't defend Tiwa when the presenter talked down at her, stating that she (Yemi), has a fine vocal range while Tiwa just shouts.

In other news, Tiwa Savage recently

In one of the snaps, Tiwa admitted that she had not bathed even though she was applying makeup on her face. The singer explained that she was going straight from the airport to her first interview in New York City.