CDQ - Onye-Eze 3.0 hits the airwaves as one of the latest tunes to be released by talented rappers. In his usual style, CDQ comes through with “Onye Eze 3.0” in which he teams up with other rapping gurus including Vector, Zoro, Blaqbonez, Yung6ix, Dremo and Jheezy who won the ‘Onye Eze‘ battle challenge.

If you loved any of his previous songs, you would enjoy CDQ's newest banger. This collaboration is one of the best to have happened recently. Here are details about the new hit you need to listen to.

With fans deciding which songs top and trend, this is a perfect tune that is receiving massive support. The comments on YouTube are proof of this. Many believe that every artist featured on the song has killed their lines. Here are a few of the sampled views and comments by fans on YouTube:

johnson wallace: i will forever support cdq till death. This is the bang i have ever heared in afro. just that hes an underated artist. but trust me this guy is too much. onyeEze to the world Abiola Abdulrasheed: I like this 3.0 Jide Jamiu: nice one olabode olaniyi: yung6ix issa killer 100% customized lifestyle .....i foh 4 dat 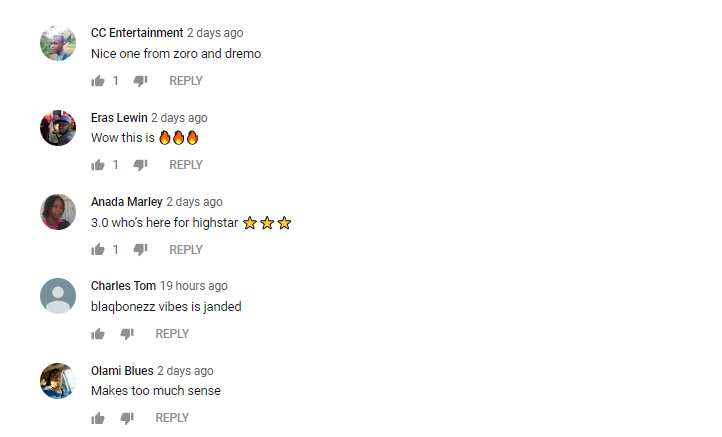 It is all positive feedback as fans appreciate the artists for a job well done.

This is the third version of the tune Onye-Eze which has now become a cypher. The lyrics are as follows:

No be me, it belongs to Onye Eze,

That mansion belongs to Onye Eze,

In fact everything it belongs to Onye Eze

You wan tarnish my image,

I go fuck you up,

You wan claim my rights, EFCC burst e up,

You be snitch, you be snake, you be dirty person, a ma dust e up

Trespass on my property

Ogun kill you from morning till 4:30,

Nobody family with poverty

Would you keep quiet okoro talkative

I can’t feel myself, I’m too paranoid like I tiff myself

I no no why, mi o kin forh fun IG sey

Everybody rushing the same ladder,

No do pass yourself aunty Janeti

No be me, it belongs to Onye Eze,

That mansion belongs to Onye Eze,

In fact everything it belongs to Onye Eze

If you love the tune and would want to have it as part of your playlist, then consider the following download options:

With several download options to choose from, you can now listen to the tune as many times as you want. Save it as a favourite.

CDQ - Onye-Eze 3.0 is one of the tunes many would consider a perfect hit and banger. Do you think of it as a hit or a miss? Let us know in the comment section below even as you share with friends and networks. Feel free to download and stream on YouTube.