In Nigeria today, feminism has become a hot topic as more ladies declare themselves feminists, while others shy away from the term, perhaps because of the heat some ladies face for claiming to be one.

A number of Nigerian female celebrities have been put on the spot by interviewers wanting to know if they subscribe to feminism or not.

Nollywood actress and wife of music legend, in an interview. She however revealed that she is pro women supporting women. The mother of two further explained that she doesn’t believe women can be kings and vice versa.

Since the interview went viral, several Nigerians took to reacting. Some ladies were disappointed while others felt she should be allowed to believe in what she likes.

Recently, former beauty queen, Ezinne Akudo, who won the Miss Nigeria title in 2013, took to social media to explain what feminism fights for.

According to her, a lady who claims not to be a feminist is in support of men getting higher pay for the same job, men getting access to better education, child marriage, among other things. See her post below.

Former BBNaija star, Cynthia 'CeeC' Nwadiora, also waded into the feminism topic. It should be known that the TV star usually refers to herself as king and perhaps she felt the need to speak up after Annie's declaration. She took to her Instastory to repost Ezinne's write up on feminism as she also reiterated the fact that she's king. 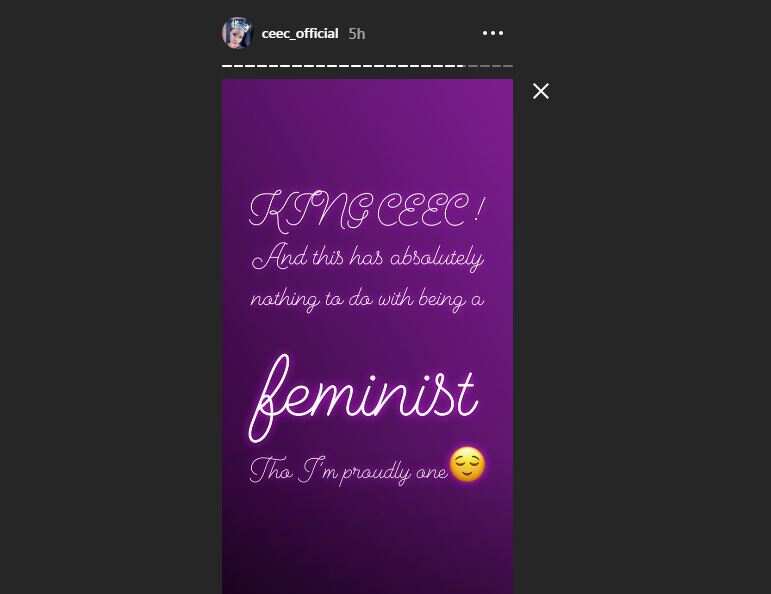 Feminism in Nigeria seems to have caused a lot of social media drama seeing as most ladies mistake the term for being against men.