Regarded as one of the largest ethnic groups in Nigeria, the Tiv people are an ethno-linguistic group in West Africa with a population of over seven million throughout Nigeria and Cameroon.

The group which constitutes approximately 3.5% of Nigeria's total population, has its language spoken by about 7 million people in Nigeria with a few speakers in Cameroon. Most of the language's Nigerian speakers are found in Benue, Taraba and Nasarawa States.

However, most of the knowledge gotten about the Tiv tribe are often shrouded in misconceptions or rather limited to the knowledge of their their monochrome traditional attires, their love for farming and heavily flawed belief about promiscuity.

With this in mind, Legit.ng has gathered a few facts about the Tiv people which throws more light into their history, lifestyle, traditions and some of their famous myths and legends.

Here are some 6 mind-blowing facts about the Tiv people of Nigeria:

According to oral tradition, the Tivs are said to have emerged into their present location from the southeast. It is believed they journeyed through southern, south-central and west-central Africa before arriving at the savannah lands of West African Sudan via the River Congo and Cameroon Mountains.

The earliest recorded European contact was in 1852, when Tiv were found on the banks of the Benue. During November 1907 to spring 1908, an expedition of the Southern Nigeria Regiment led by Lieutenant-Colonel Hugh Trenchard came into contact with the Tiv. Trenchard brought gifts for the tribal chiefs. Subsequently, roads were built and trade links established between Europeans and the Tiv.

The Tiv people are popularly know subsistence farmers whose main crops are yams, millet, and sorghum, all of which are eaten in numerous ways such as in forms of porridge, sauces and stews. Although goats and chickens are plentiful, few cattle are kept because of the tsetse fly. 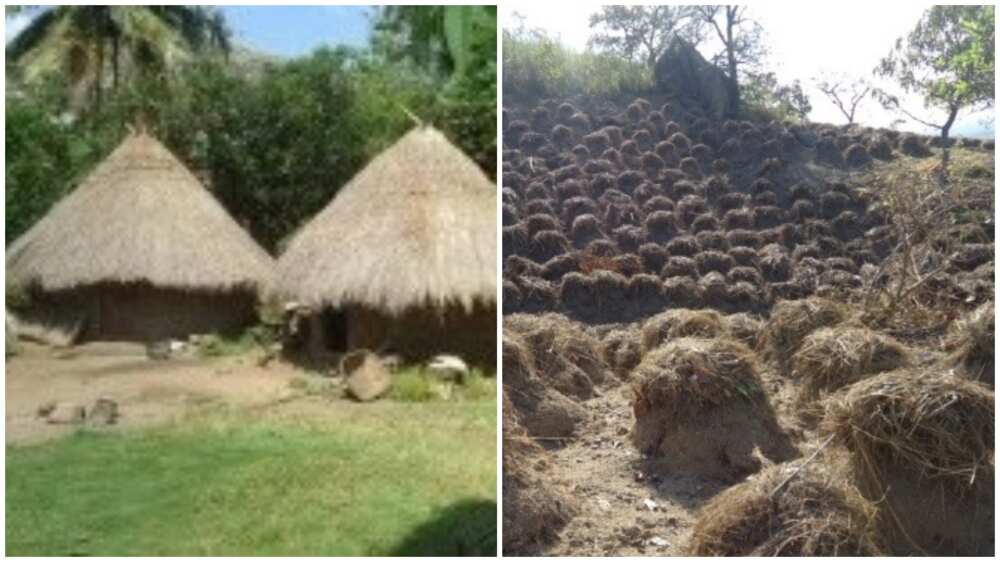 A photo of a Tiv compound and farm/African Farming
UGC

The choice of farmland is determined by its closeness to the compound. This is why it is often said that the Tiv live on their farms. Both men and women clear the land, but men do the hoeing of mounds and ridges, as well as preparing the land for planting, while women do the planting and weeding.

Just like most cultures in Nigeria, the groom comes with his family members to see the bride’s family for an official introduction. They are usually required to come with salt, palm oil, a bottle of wine, hot drinks (spirits) and any other thing requested by the family of the bride. The date for the traditional wedding ceremony is fixed and The List is given to the groom's family. On the day of the ceremony, the groom and his family come with the items requested on the list.

After the payment of dowry, the list of gifts should be presented to the bride’s father. This is a very important part of Tiv traditional marriage. Here we have the usual example of bride price list: pig, local gin plus additional alcoholic drinks (which is often expected in the form of money), azenga (cowries) Matches, Danchiki (an attire for the bride's father).

Though this isn't a requirement, the groom is expected to give money to the youth of the bride's community after the ceremony. While this can be a fun game of cat and mouse between the youths and the groom, the groom ends up appeasing the youths before he is allowed to take his bride away.

If the groom is also Tiv, his family will await the arrival of the bride in their hometown with Tiv traditional music and dancers. This process is called the ‘Kwase kuhwan” which loosely translates to 'celebration of wife'.

One of the things the Tiv people are known for when it comes to food, is their love for yams. It is often said that a Tiv man can comfortably have fried yam for breakfast, yam porridge for lunch and pounded yam for dinner.

Their love for yams reflects in the fact that pounded yam and a native soup known as genger (it is said to be medicinal and sharpens ones thought process.) is regarded as the staple in a Tiv home and often served at traditional functions. The Tiv people are also known for their love for bush meat, especially the bush rat.

There is a custom Tiv people have when they finish their meal. Instead of regular thank you', they say such a phrase as "u yôô", which can be translated as 'you have cooked' which is more or less 'well done'.

The popular story of origin contends that the Tiv people were driven from their mythical home beyond the waters somewhere to the east of the Cameroon Mountains by the Ugenyi people, considered to be their enemies. As they fled from their enemies who were in close pursuit, they came across the great waters of river Aya which they could not safely cross.

At this point, the Tiv people were stranded and had no way to cross the river. According to legend, a friendly green snake called Ikyarem came by and stretched itself across the river. This enabled the Tiv people to cross safely on its back to the other side of the river from where they journeyed through the South and West, fighting enemy upon enemy on the way. They finally settle down in the Benue province of north central Nigeria where they remain today.

One of the things the Tiv ethnic group is known for is their hospitality. However, over the years there have been misconceptions about the length a Tiv man would go to kept his visitor comfortable. One of such popular misconceptions is the belief that a Tiv man often offers his wife up for the 'entertainment' of his guest.

While this continues to be the mentality of many people about the Tiv tribe, it is pertinent to understand while the Tiv people are often friendly towards visitors, a typical Tiv man does not joke with three things: his meat, his alcohol and most importantly, his woman.