David Adedeji Adeleke popularly known by his stage name, Davido, is one Nigerian celebrity who has managed to carve his niche in the world of entertainment in Nigeria. However, with the fame and money comes a lot of and as it is, Davido has quite an interesting life filled with it.

The 26-year-old who rose to fame in 2011, has over the years, proven to many that he is indeed more than just a spoiled rich kid. From dropping hits back to back, to snagging awards both at the home front and at international levels, there is no doubt that he is indeed a hard worker.

While Davido never hesitated to show his musical talent, his love for the fast life was evident and his affluent lifestyle and love for the ladies, were things he did little to hide. As with many other Nigerian singers having kids out of wedlock, it came as no surprise when news broke out that Davido was going to be a father.

The year 2015 was definitely an eventful one for the Baba Olowo crooner as he witness his life changed forever.

The singer who at that time was involved with Sophia Momodu; a cousin to Ovation boss, Dele Momodu, got her pregnant with his first child, Imade Momodu. was one that left social media users talking for day.

From accusing her of infidelity and even demanding for a DNA test, to forcefully taken the child from her mother few months after birth based on accusations of Sophia smoking weed while breastfeeding the bab.

Needless to say a messy custody battle soon followed after which Sophia who is 5 years older than the singer, won full custody. While all may be well with them as co-parents to their daughter, their relationship as lovers seized to exist.

Just when many people taught Davido would take a cue from his first experience becoming a father, to apply more care in his dealings with women, it appears the singer was just getting started.

Apparently, Davido loved fatherhood so much he got yet another woman pregnant barely 2 years after welcoming his first child.

The lady identified as Amanda resides in the US and according to report, they met on one of his business trips there. Very little however is known about the beautiful lady whose relationship with Davido was devoid of drama and scandals. She welcomed her first and the singer's second child, Hailey on May 9, 2019. 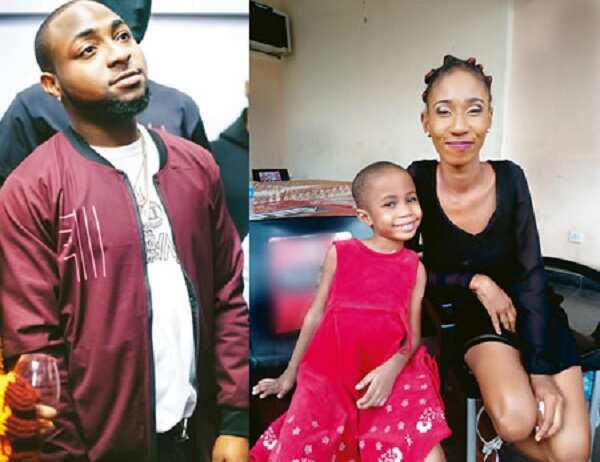 Money, fame, fatherhood: All you need to know about Davido and his 3 baby mamas
Instagram

While social media was still buzzing with reactions over the news of the singer's second child with baby mama number two, yet another lady left jaws hanging after she came out to claim that she had a child for the singer back in 2013.

The lady identified as Ayotomide Labinjo, claimed that the singer denied the pregnancy until she got her lawyers involved and the singer was made to carry out a DNA test paid for by his billionaire father.

Despite the test coming out as negative, Labinjo insisted and still insist till date that the child; a girl is his as she accused him of paying off the doctors even after his father had already settled the bill.

Unlike Davido's other two daughters who look like him, the child who is 7 years of age bares a striking resemblance with Labinjo making it hard for even social media speculations to be in her favour.

Davido's relationship with Chioma was the talk of the town in the year 2018. How a singer with a penchant for the expensive things and a lavish lifestyle, could settle with a seemingly simple young girl like Chioma, was something many people could not comprehend.

Despite the unflattering gossips about her, this did little to stop the singer from falling even deeper in love with the 24-year-old chef. From taking her on shopping sprees in different countries to throwing her a lavish birthday bash in which he gifted her with a Porsche car worth N45m. With the way the singer constantly openly professed his love for her on social media, it was clear to many that this was his 'final bus stop' as prior to dating Chioma, the singer wasn't one to make his relationships public.

With the Davido bragged about Chioma, many people assumed marriage was definitely in the picture for these two. However, not many people saw Chioma taking in before the wedding which is slated for 2020.

She recently gave birth to a bouncing baby boy, making Davido not just a proud father but giving him a mini David as well.

While many would consider Davido's lifestyle a reckless one, one thing is clear and that is the fact that Davido is big on family and the importance of maintaining a close-knitted one, considering he comes from one himself. The singer not only makes sure to spend as much time and give as much attention to all of his kids and continues to take care of them in the best way possible.

Davido is engaged to Chioma and they plan on tying the knot in 2020. Hopefully, Chioma will be the last baby mama and hopefully, wife, to bear the successful singer, a child or perhaps, children.